The Church of the Blue Margarita

I can’t help it; this is what I see when I look at a tree: whorls of bark, translucent leaves, beetles, birds, sap: like blood, like rivers flowing; clouds, roots digging into earth, ferns, cats, jungles, worms, children laughing, old forests, fires, volcanoes, leaves again trembling in the wind, sunlight, sun, stars—this wonder, from atom to cell to tree to mountain to solar system, galaxy upon galaxy flung like shells on the wide shore of the universe.

This is a late-night conversation under the stars. We are sitting on Bill and Karen’s porch, drinking margaritas and smoking cigarettes, exploring the universe. Karen and Yvonne think that a tree is just a tree, it doesn’t have to be anything else, and we should appreciate its unique treeness. Bill and I say, yes, the tree embodies treeness, but it’s also the universe. Karen and Yvonne ask which came first, the psychedelics or the mindset. Bill and I agree that the drugs we once ingested are not to blame. When the two of us come back from getting refills in the kitchen, we find Karen and Yvonne hugging the tree in case they’ve hurt its feelings. They are the practical ones.

Each of us is acting with a primal consciousness that yes, our very words and thoughts affect the tree. The tree is aware of us: we are interconnected in the fabric of being.

Once the world was a forest and we wandered in its trees, dependent on their fruits to live. We thought to tame the trees and their fellow plants, and invented agriculture; then we became slaves to the fields. And we are still the slaves of trees, of all the vegetable kingdom; we must tend them or die. We need them not only for their fruits but for the very air we breathe; a forest is a vast oxygen factory. Maybe the ozone layer isn’t being depleted only because of chemicals, but also because we’re cutting down the forests. Maybe life is still as mysterious as it was when all of us were tribal peoples; maybe the progress we think we’ve gained through the centuries is merely an accumulation of facts, not answers. Maybe a prayer to the moon, that rock in the sky, is as valid as it was centuries ago; the moon still moves the seas. I pray to the god behind the moon: the moon may be a symbol, as words are, for the light behind the darkness, the god who can’t be contained in rocks or statues, names or stars, yet Is—in all these things and more. The Most High, the Holy, to be worshipped in all things and of all things and beyond all things created.

That is one of the creeds of the Church of the Blue Margarita.

We light five candles, the tall plain glass ones. Karen has put labels on them: Love, Joy, Peace, Compassion, Health. I have brought a vase filled with water, and a handful of stones: crystals, cat’s-eye, obsidian, malachite. We are promising to work on what we think the Holy is telling us. Fire, the breath of spirit. Water, fountain of life. Words, which are also made of air. We make up the rituals as we go forward.

I started the Church of the Blue Margarita about three years ago. It is a church without walls, without organization, without official membership. As a veteran of a failed religious commune and a failed spiritual discussion group, I still needed a community of believers. I do not understand the community of traditional churches, and I was at a loss until I looked around my life. My dearest, deepest friends share my questing heart; we have spiritual discussions all the time. I live my life in church, I realized, in a body of believers who don’t know each other, and don’t agree on everything but have hearts in common. We are all afraid of being trapped in the boxes of tradition, and we don’t want the Holy trapped in one, either.

I met Tama in a writing class. I had written about a character having a visionary experience, and she came up to me after the class with the strangest look on her face and asked me if I really saw those things. I was afraid to say yes to this weird stranger, but I did. She sees things too, it turned out, and she wasn’t nearly as frightening as she appeared. She and her husband were part of the disbanded discussion group.

We lay out a spread of cards, looking for keys to the present. Tama brings tiny cymbals to my house on New Year’s Eve. At midnight, she rings them to drive away bad spirits. At her house, we tear apart a cigarette, scatter a tobacco offering over little Po’s grave beneath the hedge, remembering his brave dog spirit.

Marge attended a weekend retreat in a yurt set up in the desert. She felt the heart of the earth, heard a song in the silence of the stars. The women who were there danced bald-headed in the rain, celebrated life in the midst of their cancer battles.

She makes chocolate bread for Christmas, delivers it to the door. We make email prayer chains, trying to heal the world.

Rita wanted to do a ceremonial writing at the spring solstice, inviting the fresh breezes of spring to whip away winter’s tired issues.

We meet in a church, play Gregorian chants on the CD player, light candles, write our heart’s prayers.

Each of us has experienced the sense of the numinous—the sense of something beyond the normal range of perception, a conviction that we can see more, be more, than we are. We’d rather live than make a living; none of us is rich, and not likely to be. We’re misfits, living on the fringe, on the edge, on the border—we want to be pioneers of the spirit.

We want all borders to be permeable. Even flesh is permeable to light. We’ve all said that we want to cross the border, enter into a different state of being, learn how to live in that other perception. We’ve also agreed that we want to be in the world, yet not of the world, and we’re trying to live whatever that means, to the best of our ability. I wonder now if what that really means is to attain comfort in the borderlands: like the geographic area we live in, not wholly one thing or another. Perhaps the most desirable state of being is that of comfort with ambiguity, being able to cross from one side to another, adjust perception to the state we’re in.

Other groups seemed to fail because they couldn’t agree on a group identity, or on rules, so I have created a church without either, a church without borders, a church as hard to define as its name. It just is; it’s not trying to be anything, so it can’t fail.

I have co-opted a host of people, famous and otherwise, who by word and deed have made me feel they’re kindred spirits. Many of these people have chosen their own churches to belong to, and some would be horrified by the word church. (Although I worry that I’m like the Mormons, baptizing the dead, who never asked for it, I hope I’m more like God, who says, “You belong to me, even if you don’t know it.”)

What all of these people have in common is that they see the connectedness of all things and therefore have problems with dogma, or Final Pronouncements. When they seek understanding, they are not only seeking information, as some scientists and religionists do; they are seeking meaning as well. Mystery intrigues them, and they celebrate it.

My friend Gary, the mathematician, emails me about the Sapir-Whorf hypothesis, that “we dissect nature along lines laid down by our native languages … by the linguistic systems in our minds.” I email him back that I’ve been pondering that very thing, but I don’t think we’re doomed to that perception. If as some of the linguists think, we’re hard-wired for language, it has to be the original language, the language of stars and trees—which must still be there, deep inside us, to be rediscovered.

Rita calls it the Church of the Blue Madonna, and that’s true also. It’s the Church of the Borderlands, in keeping with the myth of the Goddess of the Americas, that in the “New World” there is hope of an assimilation, a marriage of spirit and technology, a hope for new creation: peace on earth and goodwill among all its creatures. The Goddess of the Americas is the reincarnation of the Mother-Creator, the Mother of all the gods: this is her title in the liturgy of Her Holy Day according to the Catholic Church. She is Mother of the Universe and of the Divine Man, Jesus; she is the goddess of volcanoes and rainforests.

A tree is a god; God is in a tree, in all trees; a tree holds the world within its branches, roots, sap, and leaves. A tree joins the worlds of earth and air, rooted in both; a tree represents the world in many spiritual traditions. We, too, hold the world within us, the holographic world where all living things are built up of DNA.  Scientists say that in every single gene there are strands and strands of  “garbage genes,” thousands of bytes of unused information.  These may not be nonsense or garbage—they could hold the world within them, all the beauties of creation. We could clone the universe, if one scrap is left. We are the fools of faith in things not seen.

My grandfather died December 9th, and for the first time our family celebrates the holidays at my dad’s place instead of my grandparent’s house. 60 miles from the city, under a sky full of stars, we hope for healing in the New Year. We’ve built a fire outside; my dad’s wife has made a straw man, and we’ve written down our secret failings on scraps of paper; we burn them with the straw man on this New Year’s Eve and hope the wind will carry our grief away. We drink margaritas and champagne and sing campfire songs under the stars. Through tears we sing a harmony of hope.

Ritual is a way of turning ourselves to face the Holy. In the Church of the Blue Margarita, we borrow rituals from many traditions, but we try to remember that even washing dishes can be holy. A kind word, a helping hand, are as beautiful as a star pulsing fire, as necessary as the work of trees.

These are our rituals: we sit on our back porches, drinking margaritas (blue ones, berry ones, the original lime); we hug trees. We light candles, we trade music, we play cards and sing. We make rubber stamps and with colored inkpads create our own note cards. We talk about work and family. We work and clean house. We cry on each other’s shoulders, trade wordless hugs. We go to dinner and the movies. We read; we write; we ponder; we paint. We live our lives, and we love each other. Our liturgy is laughter. 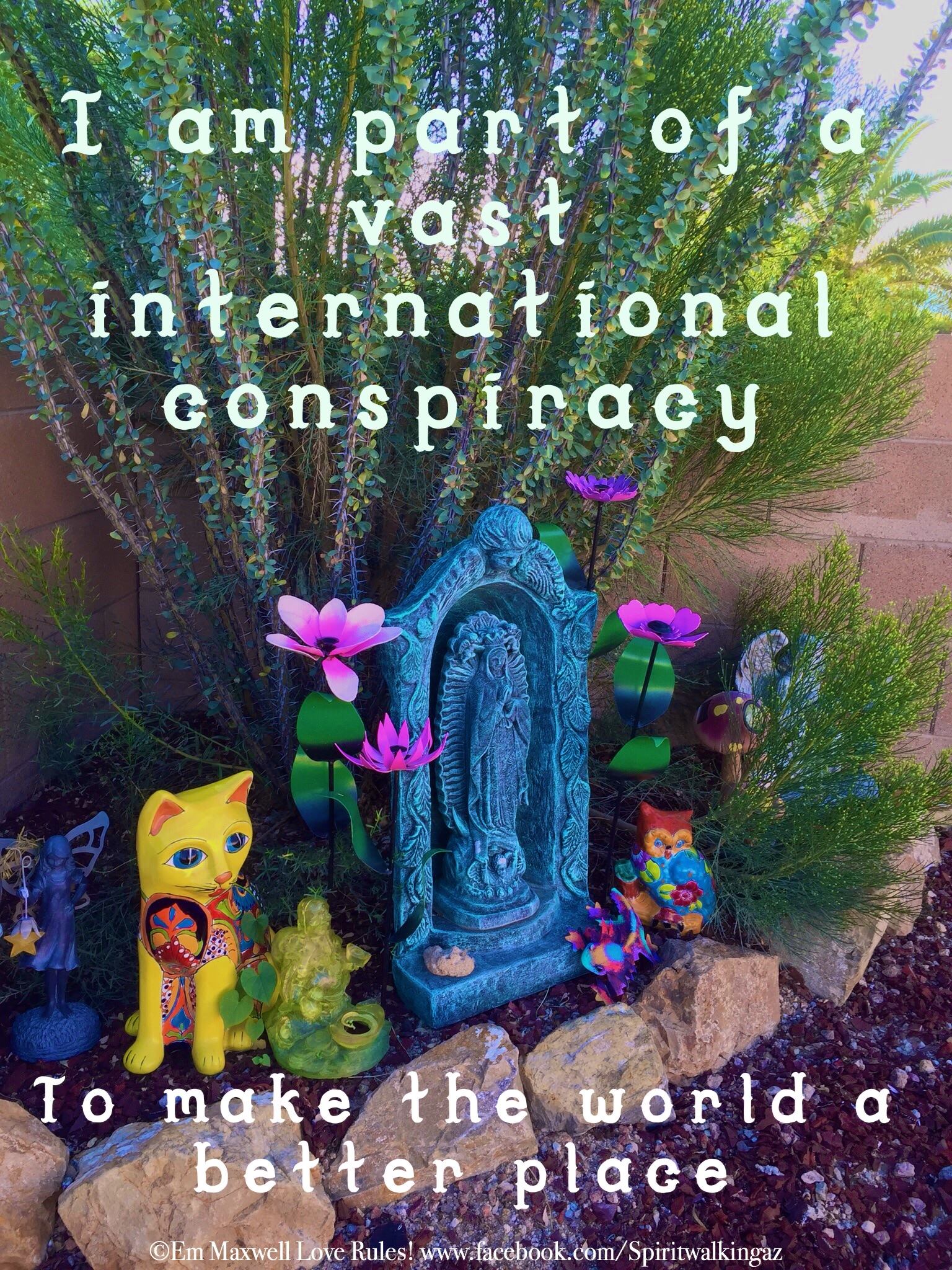 I hope you are, too! 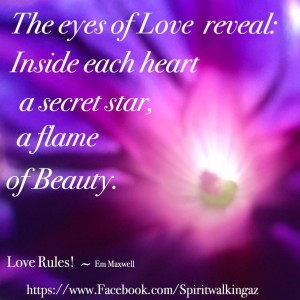